Earth Will Self Destruct In One Minute! 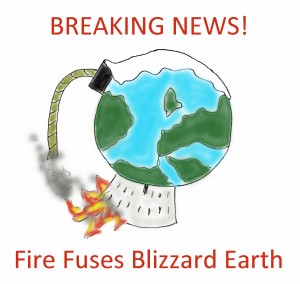 So there you have it, it’s all in a headline. If the headline doesn’t grab you by the time you’ve read the last word then the chances are you won’t bother to read the news story.

Unless you’re bored of course.

Now, last month most of Britain woke up to a blanket of snow. Bit of a surprise considering the mild temperatures experienced up to that point. Even Christmas day had reached double figures.

The white stuff didn’t last long though and things are now picking up again. February went from -18 to +18 degrees centigrade which is just crazy!

Is That True? Let Me Check

So as March arrived I was a little shocked to read the news headline of “Snow Blizzards To Hit Britain”.

Along with thoughts of “Oh no not again”, I doubted that it was actually a true story to be honest.

However, out of curiosity I continued on and read the story.

No Need To Panic

Now it did say that snow was possibly likely to fall on an island north of Scotland. Can’t remember which one now but technically it’s in Britain. The article explained the term “blizzard” as a wind speed of 25mph or more.  That surprised me. I thought it would be faster than that?

Anyhow, technically the headline was true. Albeit over dramatic but it had done its job nonetheless. I’d read the article from top to bottom proving it was a good piece of journalism.

Over the weekend another great headline popped up.

Let me briefly explain the story first for you. Some masked inmates ran amok in a prison. They set fire to buildings, overpowered the guards and caused around £5m worth of damage.

The headline for this story focused on the punishment of the offenders, the arsonists if you prefer. It said “Inmates Jailed For Prison Riot Damage”.

Don’t Do That! Now Do It Again!

Yes that’s right, the inmates have been punished by… well… locking them back up. Hmm.

To be fair, it was a great headline that made me read the story, so once again a good piece of journalism.

One Bean + One Bean = Some Beans

I’ve just read a story about the mathematical ability of adults in the UK.  It was titled “Half of English Adults Have Poor Maths”.

Not overly exciting or dramatic I know but as I quite like being challenged by the odd number crunching question I thought I’d have a read.

It basically said that 56% of UK adults admit to having no understanding of mathematics. “So what?”, I hear you say. “What’s this got to do with my earlier topic of conversation about headlines?”.

Well you see, it would appear the journalist writing this very article falls into the 56% bracket. I know I’m being a bit pedantic but the headline is wrong, even a little misleading. As far as I can recall, I was always taught at school that 56% does not equal half.

Whilst wrong though, I did end up reading the story.

Now, did you know that fuel bills are set to double?

No, I bet you didn’t but that could be my next heading. It may not be true of course but it appears I can say what I like if I word the story as a potential prediction for over the next decade.

Who knows, I might be half right… or maybe 56% wrong. Apparently I can be both.

So you see, headlines can be bang on perfect but they can also be misleading and inaccurate if you stretch things a little.

Oh, and as for the headline at the top of this article?

Well I guess I was wrong, but as it could’ve potentially been the last thing you did on Earth I feel privileged that you read this post right to the very end. Thank you.

This entry was posted in Cajuzi, Knowledge, Out and About and tagged Cajuzi, headlines, news, Silly, weather. Bookmark the permalink.

2 Responses to Earth Will Self Destruct In One Minute!