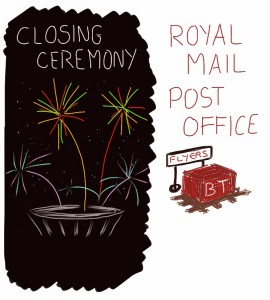 Last week at home we had the unfortunate matter of our landline home telephone deciding to no longer work.

As if by magic it just suddenly went silent during Tuesday morning, and to be honest it was fairly adamant it wasn’t coming back any time soon.

My curious mind couldn’t help thinking the other end of the phone line had been unplugged in the exchange box.  Hmmm…

With it went the broadband connection. Fortunately British Telecom (BT) are responsible for it all so I promptly logged a fault with them.

Now, as I’m on their superfast, high performance Infinity 2 broadband deal I’d hoped for a swift investigation.  Unfortunately I was mistaken.

“Sometime over the next 4 days we’ll have a look for you”, was the response.  Four days? This is 2012 for heaven’s sake!

Well, eventually an engineer turned up on Thursday. Oddly enough after a swift visit to the local exchange box he had it resolved in a jiffy!

It’s quite frustrating, paying for an expensive service for two days of nothing. Wonder what they do with my money if it’s not to fund my fibre connection 24 hours a day?

So, this leads me onto something that popped through my letterbox yesterday. You know the old fashioned way of communicating.

The envelope in question was addressed to “The Householder”. It was from BT.

Ex-Directory Does More Than I Thought

Odd, I’m sure the last time I spoke to them they knew my name. And what’s up with not emailing me to save time and money?  You know, my money that I pay every month!

May be they didn’t know they’d fixed my connection issue so decided to write to me instead.

I’m assuming of course that it was a general flyer that every household received. Fair enough, although seems a bit pointless in one way.

So what was inside?  Well it contained a rather large poster, about A2 in size, of a colourful and funny cartoon picture. Great, I love cartoons!

The cartoon related to the London 2012 Olympics and had plenty of comical and light hearted shenanigans going on all over it. Clearly a lot of effort had been applied to producing it.

Now given that the London 2012 Olympics finished over a week ago, 10 days to be precise, I assumed it was celebrating Team GB’s success in winning so many medals at home.

The main heading across the middle read “This Summer’s Biggest Deal”.  Below it was an offer for broadband and calls “from the official broadband provider of London 2012”.

The next heading said “A Performance you can rely on”.  Words such as reliable and superfast were mentioned in the statements that followed.

But You Know I Have That?

Apparently I can keep right up to date with all the results from the Olympics, with BT. It even comments on my existing service failing right at the final moments of the 100m sprint, and that I need to get a new service from them to guarantee unspoilt entertainment.

What… how… but… I’m on the most expensive, the fastest and best service that BT have available.

Don’t get me wrong, I fully understand the bold sales strategy being applied here but come on, really?

I’m sorry to say that we only have the London 2012 Paralympics remaining.  The main London 2012 Olympics fortnight has long since departed so I can’t keep up to date with the 100m Final or any other event that I may pass interest over.

Oh hang on, of course I did. Silly me.

As I’ve mentioned, I already have their high performing superfast BT Infinity 2 service rendering this flyer as completely pointless.

Then there’s the confident wording relating to reliability and performance.  Oh please BT, be careful with your timing.

Now, had this turned up a week ago followed by the writing of this article then I’d be wondering if I’d been responsible for my own loss of service last week… but then I’m not sure they know who I am, where I live or even what day it is.

Thanks anyway BT, I enjoyed the cartoon!