Busy Doing Nothing… Or Are They? 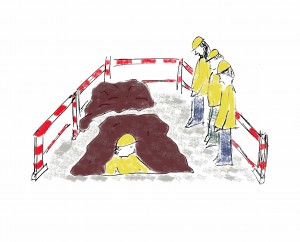 So we just stand here right?

It seems as though wherever I look nowadays there are workmen about. On roads, street corners and even shopping centres. They are everywhere.

However, despite this huge presence it’s rare to see a workman working by himself. Take this morning for instance…

I passed a section of footpath surrounded by an excessive number of red and white barriers.

In between the barriers I could see a man standing inside a rather deep hole. Only his head protruded above ground level as he stood upright in his narrow mini canyon.

Now, his colleagues were clearly above ground, not breaking a sweat, and that made me a little curious…

There were three of them.  All dressed in bright yellow jackets with their hard hats on, just like the man in the hole.  All three of them stood still, staring into the depths of the Earth whilst passing the odd comment as I walked on by.

What Are You Doing?

So why were they there, and what part do they play in this disruptive development?

The man in the hole seemed to be very busy but the chaps standing above ground seemed to be quite chilled and relaxed.

I Guess They Could Be…

So I tried to figure out what their roles might be.  Presumably one of them could be the boss, the man in charge in case a disaster happens.

Another could be the planner, the man who directs what happens and when it should happen.

Maybe the third man was a backup, someone to replace the poor chap who had clearly drawn the short straw out of the hat and ended up nearer the centre of our planet.

I guess though that any of them could have been a gas specialist, an electrician, the driver, a health and safety officer, an automated digger controller… whatever one of those might be, or perhaps just a good old tea boy.

You see, at first it appears to be completely over the top to have 75% of the people on the job doing absolutely nothing, but in fact it’s entirely feasible they are all there for a very good reason.

Oh, and most likely it’s perfectly possible that without one of them the project could not continue.  The entire process could fall apart.

They are all the same. Without one of those critical roles being performed the entire event has to stop or face complete failure.

So you see, I should just believe that these additional people are actually there for a good reason, and that they’re performing a critical role in the project or job that is being undertaken.

As individuals, it’s natural for many of us to think that we’re vital to a team or to things that may happen in our personal and professional working lives.  It feels good to be wanted after all.

So keep going, don’t give up and have the self belief that we are all important in our own little ways.

Right then, I’d better leave it there.  I don’t want to be responsible for my colleagues taking a rest with their feet up on their desks… so I’d better go and pop the kettle on for another cuppa.

After all, I’d only be digging a hole for myself if I didn’t.

This entry was posted in Out and About, Travel and tagged Cajuzi, team work, workmen. Bookmark the permalink.

3 Responses to Busy Doing Nothing… Or Are They?