When I Grow Up I Want To Be… 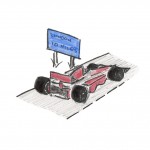 Think I'll stop for a coffee

Children have always looked up to others, and I don’t just mean literally. I’m sure we’ve all had at least one dream of becoming someone special in our lifetime.

For example, a little girl might have aspirations to become a famous singer, or perhaps a Hollywood actress.

Not all girls want to be famous though. Some may be thrilled at the thought of being a school teacher or a nurse and the rewards that those roles provide.

For boys it tends to be a little more action and thrill based.  Their desires focus more towards being a top fighter pilot hurtling at Mach 1 through open and clear skies. Some boys dream of becoming a motor racing driver with the adrenaline rushes that blow your head off at high speed as your backside sits inches from the tarmac.

I guess nowadays most are aiming to be the best footballer in the world, but I’m not sure if this is connected to being in front of thousands of fans each week or the receipt of a lottery win into your bank account every month.

Not Many Make It

For me on the adrenaline rush side of things it was one of two options, either to become a basketball player or a formula one driver.

Clearly the latter is incredibly difficult to achieve. Not that playing basketball is easy of course. To be in F1 is an incredible achievement. With only 24 drivers competing in any one race it highlights the niche market of talent.  It’s completely different to some other sports, take football for instance.  Football clubs like Barcelona and Manchester United each could have 30 or more players vying to play every match. It’s a complete contrast.

As for basketball, I loved playing it, and to be honest I still do when I get the chance.  My height helps hugely, which is a perfect excuse as to why I never chased the dream of an F1 driver. There’s no way I could fit into an F1 car!

On a different theme altogether, one dream I had was to become a top Disney artist. Even today I’d still love to fulfil that dream. I wanted to be in the world of creating characters, story lines, animation, movies… the whole lot.

What a wonderful and rewarding life that would give, and even now just thinking about it makes the hair on the back of my neck stand up. I love to draw, sitting at my drawing board and letting my imagination take over.

So given that I ended up in IT, designing and developing computer systems, means my aspirations that I’ve had since I was a little boy will remain unfulfilled forever.

Even my current location of work doesn’t deliver much excitement as I have a commute of over 60 minutes. That’s a minimum of 2 hours a day for 5 days every week. I’ve driven the same route for the past 15 years. As you can imagine, it’s a bit boring now. I could take a different route but that would just mean I’m spending even longer in my car.

Despite this mundane driving experience each day I recently started playing F1 2011 on my PS3. Essentially the latest Formula One game to hit the shelves. I have to say I’m finding it a joy to play. It’s not quite reliving a dream but it is excellent. The intensity of the concentration and commitment required is truly amazing.

Now, whilst playing it I started to think about the reality of my commute compared to being an F1 driver.  My initial thought was that they are worlds apart, but I’m not so sure.

You see, I might complain about my long tiresome repetitive drive but let’s just think about an F1 driver for a moment.

During each race he’s required to drive around the same short distance over and over again. Given a race may last 50 or 60 laps, and they do plenty more besides over the course of a race weekend, that actually seems quite dull when I think about it.

I Can Do Lots More

My scenery has changed on and off over the years and it’s pretty much in focus wherever I look, so somewhat different to a race track. They do get to drive into the pits, but I get to stop at petrol stations. I could even stop for a coffee without any penalty.

Talking of penalties, I get to stop and hold up traffic without any issues. Unless of course the vehicle behind has a flashing blue light in which case it’s no different to a safety car situation. They should be in front and it’s a good idea to not overtake them. Yes I know, they have a yellow light and not a blue one but you get the gist.

I can switch lanes too, or drive slower, or start later, or arrive later, whereas they of course can’t. They have to drive the exact same line at the same high speed for every single lap. It’s a completely different concentration level for them and no denying it’s one incredible ability.

I do have hands free access to my mobile phone, so that’s similar to them talking to a race engineer on the pit wall. Oh, and I can drive my route in reverse, something that would be frowned upon and receive a lifetime ban for sure in the world of F1 obviously.

So you see, an F1 driver may get to experience a bigger buzz than me but taking everything into account my commute doesn’t seem so bad after all.

There’s one big final plus point for me. If I arrive home at the end of the day 5 minutes slower than yesterday, I still receive a great welcome home from my family. Which is better than being told I’m no longer needed and that I’m being subsequently dropped for someone better.

Right then, time to head back to the drawing board.

This entry was posted in Out and About, Travel and tagged Cajuzi, Dreams, Driving, F1, Formula One. Bookmark the permalink.

2 Responses to When I Grow Up I Want To Be…