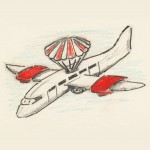 I’m writing this whilst sitting in row 39, in seat C, on a Thomas Cook flight bound for Gatwick. It’s an aisle seat lined up alongside the emergency exit doors. I pre-booked this seat for the extra leg room just as any normal giraffe would.

First Up, The Nervous Steward

I’ve just watched the safety demonstration by the male steward. He stood right in front of me. Worryingly he had one of those uncontrollable giggles and smiles going on.

It was like a budding young actor on stage for the first time who couldn’t withhold his nervousness, embarrassment and excitement in front of the vast audience. Anyhow, he did a fine job and held it together well.

He held aloft a seat belt and showed us how to use it. He ran through the safety leaflet. He flapped his arms to highlight where the escape routes were, although I couldn’t help wonder if it was an example of what I should do if required to depart at several thousand feet. He then followed this up with the face mask demonstration, calmly placing what can best be described as a yellow beaker over his nose & mouth.

He finished up with the usual life jacket show. It went something like this… place it over your head, tie the straps round your waist and to the side, once out of the aircraft pull the toggle to inflate it, use the blow pipe if it’s a bit flat, and then finally use the whistle and light to aid your rescue. Presumably so the pirates and bounty hunters, sorry the rescue teams, will be able to find me amongst all of the plane wreckage. It was the same demonstration that they’ve always given, always have and always will.

Now whilst that sounds all very handy I do have a bit of an issue here. Well, and a little more besides. You see, the first thing is he’s suggesting that I must do all of this for myself before starting this procedure on my children.  Yes I know, of course this does make sense, but I can’t help thinking I’ll be frantically puffing away whilst seeing my daughters flap about in choppy waters trying to get a good grip on a piece of wing. Or worse fighting off Captain Hook with a piece of undercarriage.

Then I thought, hang on a minute. Let me get this right. Whilst the aircraft plummets out of the sky I need to calmly attach a plastic cup to my face so I can breath, and then I can assist my daughters. Ok that’s sort of very sensible too when you think about it. Then, whilst performing our Olympic dive over the Atlantic I just need to pop our life jackets on and tie them up. Hmm, but we’re sitting in our seats, belts tightly fastened with an oxygen line connecting our heads to the over head lockers looking like something out of the next alien blockbuster movie.

So I gather after temporarily holding my breath to disconnect my umbilical cord from above I need to put the life jacket over my head and tie it as best as I can. Then assist the little ones in doing the same.

Waiting for the Impossible

At this point everyone must now wait for what is to be the gentlest landing on water that has ever happened to avoid wiping out all forms of life. Bar the amazing achievement by Captain Sullenberger who glided his Airbus 320 down gently onto the Hudson River.

So somehow the pilot and his merrymen need to level her belly out, slow her up from a million miles per hour to about two, and lay her down on the choppy water like a sleeping new born baby being placed into her Moses basket.

I am not a pilot but I’m pretty sure that’s impossible. The reality is surely that the “baby” will go head first much faster than was initially anticipated.

And here’s my problem, what good is a life jacket when you won’t be alive to even remember in the sheer panic of what to do outside the craft?

With a life jacket on I would need to have left the plane before impact to avoid being wiped out instantly. So I’ve had a thought…

Surely the better option is to have a parachute, and not a life jacket at all? Granted we may have similar issues putting it on, in fact possibly easier as it doesn’t need to go over my head.

And yes, I appreciate that leaping from a plane travelling as fast as a space rocket hurtling into space, albeit the wrong way, may not sound like the best idea. Or possible for that matter. But I can’t help thinking that I’d at least be able to look forward to a parachute jump, something I’ve never done. Think of the thrill, and the view would be quite spectacular too.

There are of course flaws to all of this, but it’s early days. The people at the front of the aircraft for instance run the risk of being made into a bolognaise with the engines and wings, so perhaps their seats should be cheaper?

Plus there is the landing. If we are over land then there is a good chance of survival. The problem comes when an ocean beckons below as I will of course need a life jacket.

My conclusion therefore is that I would like a life jacket with a parachute included in the back of it please Mr.T. Cook. Although suitable instructions on which cord to pull first are essential.

As my iPhone is currently on airplane mode I will have to wait until after landing before posting this. So by the very fact that you’re reading this now I can rest easy knowing that my life jacket was not needed, and neither was my parachute… that they forgot to pack.

This entry was posted in Travel and tagged Cajuzi, Flight, Holiday, Life Jacket. Bookmark the permalink.

One Response to Swim? I’d Rather Jump!