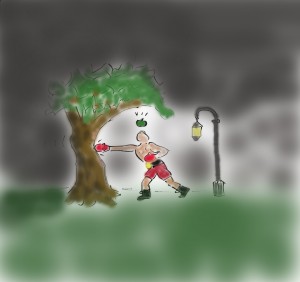 Who came up with that bright idea?

Yesterday I read a news article regarding the passing of Joe Frazier. At the age of 67 he lost his journey in life a month after being diagnosed with liver cancer.

Now, this article isn’t entirely about Joe Frazier, it’s more of an example of a situation on something that could well be a very common occurrence amongst us all.

Something that made me curiously raise my eyebrows.

You see, whilst his name is familiar to me, I wouldn’t have been able to tell you too much about what he actually achieved in life.  I knew he was a boxer, but as for being aware of any further career details I really struggled.

I claim it’s not my fault though, well not entirely anyway.  He started to achieve success before I was born and then his big events occurred whilst I was living in my single digit years. So I can sort of excuse myself there on that one.

Fortunately the news story filled me in with the details, which I guess is part of what it’s supposed to do.  He defeated Muhammad Ali, wow!  Plus he defended the heavy weight title on more than one occasion.  So in terms of being a boxer that’s a great record of success.

Even if my ignorance meant I really didn’t know about him.

So, this made me ponder for a moment about the whole “famous” thing. There are plenty of people around with a desire to become famous.  Some for the fame, but others I’m guessing is for the money.

For me, it would be because of something I had achieved.  Possibly something to improve the way things are done, to make life simpler for people in life.  Perhaps even a radical step forward in the world of technology.

I’m pretty sure that’s not going to happen, well not now anyway, but if it did I wonder if I’d ever be remembered 100 years on from now?

Sorry, What Did You Do?

There are plenty of famous people in the world but whilst we may know their name we may not necessarily know what they did during their life time to award them the famous tag.

I’m not talking about the current “so called” celebrity world. I’m referring to famous people from possibly decades before we were born that truly made a difference to the way we do things.

Force of Gravity Lights the Way

For instance, a vast number of today’s population have heard of Albert Einstein.  As to how many people actually know why may be a slightly different number.  My guess is lower, much lower.

Sir Isaac Newton is probably in the same “famous but no idea why” bracket for some people.  Alexander Fleming may well be another, along with Thomas Edison too.

What these men achieved in their lives has affected us all in our own everyday lives.  Yet how much we really know about them probably varies greatly between us all.

So Back To Me

Take my life for example.  After I’ve finally moved on from living on this planet, at the ripe old age of 150 or whatever it’ll be, I want people to read all about me in the news. I want people to discover how much of a difference I made to something, or how great a particular achievement of mine was.

I want people to say “Hey, I recognise that chap”, or perhaps “Oh my goodness! Have you heard the news about Cajuzi the Curious Orangutan..?”

Just one thought, well a concern really.  Will it be the first time that people actually discover what I achieved during my life time?

Will my great great grandchildren have any idea why they knew my name other than being mentioned in an old scrap book?

I hope so, but I accept there’s a good chance they won’t.

You see, I haven’t actually achieved anything yet so I’ll just be referred to as an old non-descript family member.  Mind you, maybe I have achieved greatness already and you just haven’t read about it yet. Who knows?

Makes you think though…

Right, I’d better be going. My time machine is ready and waiting for its next journey.  Oh, damn!  You’re not supposed to know about that… well not yet anyway.